skip to main | skip to sidebar

I don't like duplicating functionality. I don't need hundreds of ways to resize text. In fact, Command+ or Command- is all I need. Don't want a toolbar for it, and don't need a web application to implement text resize widgets.

I hate interface clutter. If it's not going to be used often, why put it there at all? You can instead use the space to show me something useful.

Search widgets are useful. In fact, I'd even go as far as to say that search widgets are really, the only useful widget on your site. RSS doesn't count. Weather, stocks, currency - you don't need them everywhere. You just need them in one place. I go to XE.com for my currency converter. BBC for weather. I don't need hundreds of other sites telling me the same thing.

I love simple, easy to use, to the point interfaces. Don't confuse me with all these unnecessary things - or I'm gone. 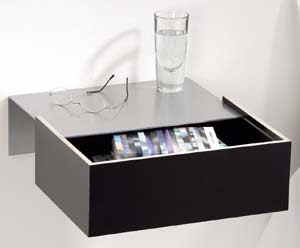 This is one of the coolest shelf units I've ever seen. (via)
Posted by Ben at 17:00 No comments:

I Love Typography. A really inspiring source for all things typographical. Articles are posted frequently.

Software is a funny thing. Most developers think that humans are idiots, and that they can't be trusted with software. So, they shove in a load of dialog boxes in our faces and expect us to learn to have to click a further button in order to accomplish the task in hand.

In Designing the Obvious, Robert Hoekman JR points out that his trash can doesn't ask him whether or not he wants to put something into it. It's obvious, because slinging a ball of screwed up paper twelve feet across the office is a good sign that you want to dispose of it.

I can just imagine such a trash can designed by Microsoft, in that if any tiny scrap of paper so much as even graced the immediate space above the trash can, the can would suspend the rubbish in mid air, waiting for you to press something on a huge remote somewhere on your desk, just so that it could continue.

That's nonsense, you say. Well, try deleting anything on your Windows machine. The 'Are you sure?' message comes up. Well, am I? Yes, I am sure. That is why I clicked 'Delete'. I am not an idiot. Don't treat me like one.

Windows certainly likes to though. Unplug your Internet connection for a second - and you actually get a message telling you that it's unplugged. Well, thank you Captain Obvious. Plug in a new memory stick and it says 'New Hardware Found'. Obviously. Don't dumb me down, and don't treat me like an idiot.

It's surprisingly worse on the Internet. It's really nice to use such applications like Blogger and Gmail, because they scrap meaningless, modal dialog boxes. This post is being auto saved in case I am stupid enough to close the browser window, and the blog itself was easy to set up.

However, you do get applications that force a load of alert messages onto you because they have no way of preventing deletion otherwise. How about, actually, not deleting the item in the first place, so that I can undo deletion? Come on, this has been in desktop applications since the Stone Age.

This excerpt from ALA is a good example of what not to do in a web application:

In the game Guild Wars, for example, deleting a character requires first
clicking a “delete” button and then typing the name of the character as confirmation. Unfortunately, it doesn’t always work. In particular:

Software should have forgiveness built into it. I should be able to undo any action, so that I don't lose my work. I don't want software to get in the way of what I'm doing, and I especially don't want to get frustrated because the site's designer decided that I needed 15 minutes to complete the task, instead of 5.

Software that doesn't annoy me is software that is quick. It won't complain when I've just deleted 70 items instead of 7. It will make me feel more productive. Surely this is not hard to accomplish. We should be making applications that halve the time it takes to do a task, not triple it.